Events Calendar
To keep our staff and customers safe we will continue to follow the physical distancing, building capacity limits and increased hygiene practises outlined by the State Government in their roadmap to recovery. When entering the library please make sure you sanitise your hands at the sanitiser stations provided. Bookings are essential and you will also need to complete a Contact Tracing Form so we can undertake tracing if needed. You can download the Contact Tracing Form to complete and bring with you when you attend the event.
LIVE & LEARN -
NOBLE & NOTORIOUS
In partnership with the The Friends of the State Library of South Australia

Were Elizabeth Woolcock and Mary Schippan black-hearted sinners or sinned against? Who was the brave and generous Miss Kate Cocks? Why did so many World War One soldiers love Mrs Seeger?

Join us to hear the stories of these four South Australian women who lived with tragedy or inspired hope.

Down-to-Earth Tours has designed this unique opportunity to visit Adelaide’s literary past at our request. The stroll will be of about 5 kilometres, with a number of opportunities to rest along the way. As well as looking at publishing houses, authors of note will include Spence, Wakefield, Dennis, Cato, Fatchen, Harris, Dutton.
BOOK LAUNCH
​SPEAKERS:
Colin Harris, Royal Geographical Society of SA, and the author, Rod Tucker
DATE: Thursday 22 April
TIME: 4.30 pm
VENUE: Mortlock Chamber, State Library of South Australia
COST: FREE (Bookings essential)
Refreshments provided
BOOK TICKET 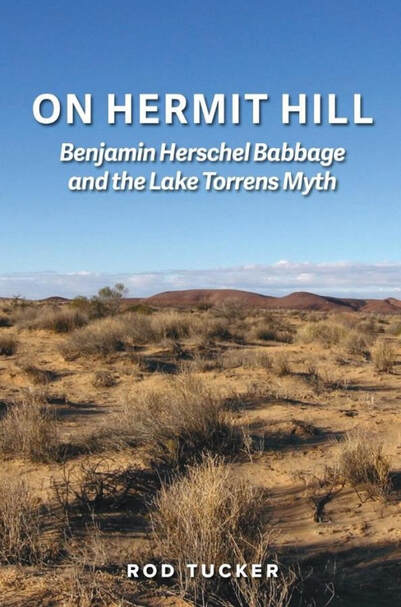 ​About the book
On Hermit Hill: Benjamin Herschel Babbage and the Lake Torrens Myth is published by Australian Scholarly Publishing. Benjamin Herschel Babbage was a South Australian engineer, surveyor, geologist and explorer. In 1858, he stood on Hermit Hill, near Kati Thanda–Lake Eyre (South), and recognised that there was a gap in a mythical horseshoe-shaped Lake Torrens that the explorer Edward John Eyre had conceived sixteen years earlier. Babbage’s discovery was a crucial step in opening northern South Australia to European settlement and paved the way for John McDouall Stuart’s crossing of the continent Babbage achieved much under arduous conditions, but the Adelaide newspaper accused him of slow progress, and the South Australian Government summarily dismissed him as expedition leader. Tucker's book provides new perspectives on Babbage’s achievements and includes original maps, modern charts, and many sketches of Babbage's 1858 expedition by Babbage and his expedition botanist, David Herrgott. Also included are sketches by Babbage's son, Charley, and two unpublished watercolour landscapes by George Nason, a teamster on the expedition. ‘This is a carefully researched and finely crafted book which will be an important addition to our literature of the European exploration of inland Australia.’ — Colin Harris, Fellow and Past President of the Royal Geographical Society of South Australia.
A TUESDAY TALK - BOOKS IN MY LIFE
In partnership with the State Library of South Australia

​After legal training in Adelaide Stephen saw the light and travelled widely, mapping Turkey for fly-drive vacations, co-founding a yachting company and participating in elephant darting & radio-collaring projects in Zimbabwe before resuming conventional employment in Australia with General Motors.

There followed real estate development in Queensland, 25 years in mining companies with operations in Australia, Asia, Europe, Africa & the Americas, and the initiation of a training program now in worldwide use to upskill GPs to detect & treat skin cancer.

Inaugural chairman of the Wilkins Foundation whose objects are to burnish the name of the great South Australian Sir Hubert George Wilkins and to ‘Unlock Your Inner Explorer’, Stephen serves on several advisory boards, plays golf & bridge badly, bodysurfs passably for one in his 8th decade and lives vicariously through the exploits of his three US-based sons,

Through an eclectic life books have been his constant companions.
HISTORY FESTIVAL -
SHAMLESS PART 1: SURVIVING ADELAIDE
In partnership with the The Friends of the State Library of South Australia

A two-part series looks at ‘shameless’ historical characters.
Some were crooks, some victims of circumstance, and a few were secretly admired for their rebellion against convention.
Part 1 looks at Maria Gandy, Colonel Light’s companion, ostracised by early colonial society; William Lott, photographer, abusive husband, and notorious as a thoroughly bad Lott; Louisa Ward and Sarah Francisco racked up close to 700 convictions between them.
This event is part of South Australia's History Festival

Image: Watercolour painting of the Supreme Court House in Adelaide by Charles Summers, c1869. SLSA B 63896
Powered by